The Absurd Rise in College Costs: Comparing Tuition and Fees From The Last 50 Years

Below is a breakdown of the rise in cost of college tuition and fees over the last five decades. The academic years are arranged by 10-year increments. For a table detailing every academic year since 1971-72, go to the end of the article. 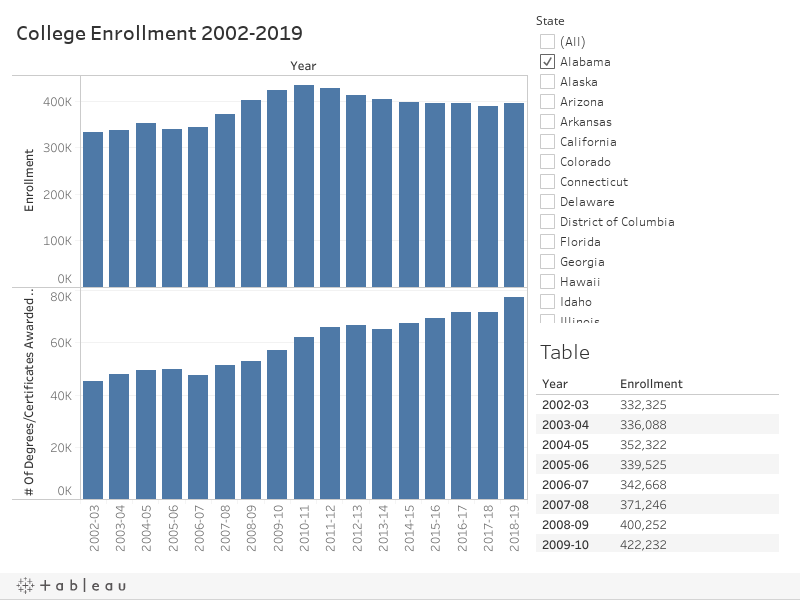 The United States spends more on college than almost any other country, according to a 2019 report by the Organization for Economic Cooperation and Development (OECD). Taking together the contributions of individual families and the government — through student loans, grants and other assistance — Americans spend about $30,000 per student a year, which is almost double the average amount for a developed country. What’s equally concerning is that, for all this expenditure on education, there is virtually no connection to the value that students could possibly get in exchange for the high costs.

Higher education costs have been rising for about the last 40 years, beginning in the 1980s. Before that, they fluctuated from year to year, but were pretty stable. Using data from CollegeBoard, BrokeScholar analyzed the change in the average college tuition and fees from the academic year 1971-72 up to 2019-20. Read on to find out how much college tuition rates have increased, the causes and how you can manage the ever-increasing costs of education.

The Rise in Average College Tuition and Fees

One of the interesting findings is that the cost of tuition and fees at public four-year schools has risen markedly more than private four-year nonprofit colleges and universities. While private schools still widely lead public schools in the tuition amount, an increase of 285% for public four-year colleges means they’ve nearly quadrupled since 1971-1972.

Another thing to note is that tuition and fees actually dropped from 1971-72 to 1981-82. In fact, between those academic years, costs of tuition and fees bounced up and down from year to year. Then, beginning in 1981-82, college tuition costs have inexorably risen year over year, with private four-year colleges experiencing a drop in costs only twice since 1981-82 and only one drop for public four-year schools. It may not be a coincidence that wealth inequality too began its inexorable and relentless rise since the early 1980s.

Causes of Rising Tuition Costs Since the 1980s

So, what happened in the 1980s that set college tuition costs off on their unstoppable rise? A study from 1990 entitled, “The College Tuition Spiral: An Examination of Why Charges Are Increasing,” has some insight into the reasons for the increase. According to the report, the rapid rise in college costs during the 1980s came about because schools aimed to compete for students by improving quality rather than lowering prices. At the time, colleges and universities were very concerned that the smaller pool of college-age students in the 1980s would result in school closings and mergers. Thus, schools embarked on a strategy of competing for students by offering more financial aid and better facilities and services, which led to higher tuitions to cover the costs of increased quality. In the past, such as in the 1960s and 1970s when pools of college-age people were larger, colleges and universities spread out costs over a larger number of students whereas, in the 1980s, this option was no longer available to schools.

The pool of college-age people and the percentage of people who have completed increased again in the 1990s and 2000s, surpassing their previous peak in the 1970s. But in a culture and system where having a bachelor’s degree is now a minimum requirement for so many entry-level positions, more young people than ever are set on graduating from college. This trend has caused both increased competition among students to get into colleges and increased competition among schools to get the best candidates. The continual improvements in the quality of colleges have served to constantly push tuition costs and fees higher year after year. However, with real household incomes stagnating over the last couple decades, more students have to take out student loans, and in greater amounts, to keep up with rising college costs.

What Causes Tuition to Rise for Public Schools vs. Private Schools?

Tuitions and fees increase for different reasons depending on whether the college or university is a private school versus a public school. Private colleges raised tuition typically to improve quality, while public school charges are heavily dependent on state funding. For instance, the largest increases in tuition and fees at public schools took place in the early 1980s, when a double-dip recession cut into state revenues. As a result, public schools had to turn to raising their fees for funding. Thus, tuition increases were slowed later in the decade as the U.S. economy recovered from the downturn.

One of the most insightful points raised in the report is that many private schools raised prices “to keep pace with the trendsetters ... a pattern that has led some observers to comment that in higher education, higher prices are being confused with higher quality.” So, while quality improvements like better facilities, staff and features push private tuitions up, the schools themselves increase them in response to market trends.

Naturally, there isn’t much individual students can do to impact the cost of tuition and fees that colleges charge. Instead, students can help manage increasing costs by following smart financial strategies. These can include things like setting up special savings accounts for college, investigating grants to attend institutions, finding work-study programs that reduce what students have to pay, getting student discounts and much more. Here’s a look at some good college savings strategies.

Every year tons of scholarship programs are offered for all types of students, like those still in high school, those who are already undergraduates and those looking for programs on the graduate level. While full-rides may pay for the whole-nine-yards, they’re much more difficult to obtain, Meanwhile, scholarships with amounts ranging from $500 to several thousand dollars are widely offered.

Typically, these types of student scholarships come with stipulations about who is eligible. A common restriction is for students to be studying in certain chosen fields. For example, to be eligible for the SPIE Student Scholarship, with an award amount of $11,000, you’ll need to be studying in the field optics, photonics, imaging, optoelectronics or other related program. Similarly, applicants for the California Capital Airshow Scholarship, which has an award amount of $8,000, must have a desire and intention to pursue a professional career in the areas of aviation management, aeronautics, aerospace engineering, aeronautical mechanics and electronics, or other related fields.

Other common eligibility requirements include the applicant’s status in terms of where they are in their education. For example, some scholarships are only open to current high school students. Some programs only take applicants that are already attending or admitted to college. Others require that applicants must already be pursuing a masters degree. The qualifications for student scholarships vary widely, so it pays to do your homework and research several programs. Check out these lists of the top scholarships available:

Countless retailers and other kinds of businesses offer student discounts and student coupon codes. These student discounts, especially when strung together in smart manner, can result in tons of savings for college students. This is a great route to go for reducing costs outside the tuition and fees charged by the school. Some great student discounts include:

Through smart budgeting and strategic use of student discounts, you can work towards reducing how much you spend on expenses related to college.

With a pre-paid tuition plan, you can purchase credits now toward future tuition, which enables you to pay for college now at current costs, instead of waiting to pay for school as tuition rises. With a college savings plan account, you invest your money, which is subject to gains and losses like other types of investments are.

The key advantage of 529 savings plans is that it grows tax-free. As long as the money stays in the account, no income taxes will be due on earnings. What’s more, when you take money out to pay for qualified education expenses, those withdrawals may be federal income tax-free and, in many cases, free of state tax as well. and when you take out the money for qualified education expenses, the money is also fax-free. If the money in a 529 account isn’t used for a student’s college education, it can be transferred to another family member, including the person who created the account. This means that the fund can be used to help all family members pursue college degrees, making these plans especially useful.

Based on the data and ongoing trends, college tuition and fees are going nowhere but up in the future. This goes for both private and public schools. Even public two-year colleges are set to continue their rise in tuition costs. Events like recessions and social crises, such as the current one caused by coronavirus (COVID-19), definitely have an impact on college costs. However, the effects are usually only temporary, and, if they do impact tuition and fees, it is usually just a slowing in the rate of growth rather than an outright reduction in costs.

Therefore, the principal way to lower college costs is for you to adjust your behavior. It is up to you managing your finances responsibly and strategically to make the biggest dent in college-related expenses. Combining the use of student scholarships, student discounts and college savings plans is a great strategy to attack the costs of college on multiple fronts. Since you can’t stop the inexorable rise in college tuition yourself, the best approach is to adapt to it.

Here you’ll find the full breakdown of the average college tuition costs for all the academic years from 1971-72 to 2019-20.